Newcastle - Amsterdam (Ijmuiden) is one of our busiest routes - sailings regularly sell out at busy periods
Tip: Don’t wait until it’s too late! Book now to secure your choice of departure time

The Newcastle to Amsterdam ferry route connects England with Holland. Currently there is just 1 ferry company operating this ferry service, DFDS Seaways. The crossing operates daily ferry crossings up to 7 times each week with sailing durations from around 15 hours 45 minutes.

The ferry from Newcastle to Amsterdam sailing durations and frequency may vary so we’d advise doing a live check for the most up to date information.

For more information, please visit our Ferries from England to Holland page.
Why use Direct Ferries?

The Port of Newcastle is actually located around 16 kilometres east of the city centre, on the north bank of the River Tyne. The passenger terminals at the port have been recently refurbished, offering all the usual facilities including sheltered walkways, a number of check-in desks and automated luggage handling.

Located in the northeast of England, Newcastle is well known for its historical ties with coal mining and as an important centre for the wool trade. Dating back to the 16th century, Newcastle's port and shipyards were once one of the largest centres of shipbuilding and repair in the world.

The city has a number of iconic brands associated with it including Newcastle United Football Club, Newcastle Brown Ale and the city's Tyne Bridge. Newcastle's light railway network, known as the Metro, operates on both sides of the river, connecting it with numerous places including Gateshead and the beaches of Whitley Bay and Tynemouth.

Amsterdam ferry port is situated in the city of IJmuiden which is around 18 miles and approximately 30 minutes away from the city centre. The city has a range of public transport options allowing easy access to and from the port, with regular shuttle buses from opposite Amsterdam Central Station coinciding with ferry departure times. The nearest station to the port is Haarlem Central where you can take a short taxi or catch the 75 bus to Plein 1945 station and then the 74 bus to the port.

In the port there are many facilities, including free car parking, a café area and toilets and near to the terminal there are plenty of restaurants, cafes, hotels and shops. 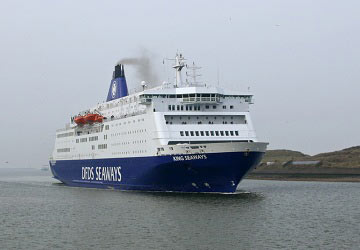 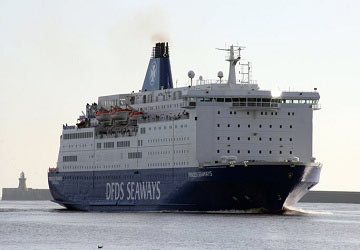 Princess Seaways
The quickest way to make & manage your booking