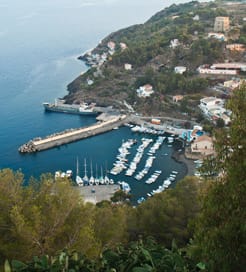 There is currently just the 1 ferry route running between Ustica Island and Sicily operated by 2 ferry companies – Liberty Lines Fast Ferries & Siremar. The Ustica to Palermo ferry crossing operates daily with a scheduled sailing duration from about 1 hour 30 minutes.

Whilst we’ve taken great care to ensure the information on this page is correct, as the frequency and duration of crossings on all routes can vary from time to time we’d advise that you get a live quote for current availability on this Ustica Island Sicily crossing between Ustica and Palermo.

Ferries from Ustica Island to Sicily

The tiny volcanic island of Ustica measures just 9 kilometres wide and is the oldest of the Sicilian outer archipelago in Italy, approximately 60 kilometres north of Palermo.

The island’s origin and its black, lava-covered exterior determined its name, which is derived from the Latin ‘ustum’, meaning 'burnt'. It has a jagged coastline which shelters a series of wonderful caves and bays, too, as well as some magnificent, sparkling grottoes.

Also, the surrounding waters are a protected marine area, which makes Ustica a popular spot for scuba divers and snorkelers who flock here for the deep dives, colourful fish, coral reef and excellent visibility.

Ustica Island is a popular holiday destination for Italians, so there are numerous crossings back to Sicily, operated by a popular local ferry company. You to sail to either Palermo on the Sicilian north coast or Tapani which is further west.