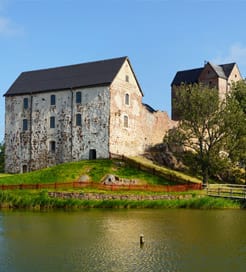 Compare ferries from Sweden to Aland

There are numerous ferry crossings operating from Sweden to Aland. Ferries currently connect 3 ports in Sweden with 3 ports in Aland.

There are a combined number of 94 ferry crossings each week across a selection of 5 Ferry Routes which are operated by 4 ferry companies including Tallink Silja, Viking Line, Finnlines & Eckerö Linjen with the shortest crossing taking around 1 hour 45 minutes (Grisslehamn to Eckero).

This is a general summary of the services on offer between Sweden and Aland, for live information select from our Fare Search.

Ferries from Sweden to Aland

Aland Islands (or Åland) are a Swedish speaking autonomous region in Finland located in the heart of Scandinavia between the cities of Stockholm and Helsinki in the Baltic Sea.

With some 6700 islands, Aland boasts an exciting mix of Swedish, Finnish and Russian culture. Around 90% of the population resides on the main island or ‘Fasta Åland’ as it known locally. The main city is Mariehamn, while other small communities on the main island include Godby and Eckerö.

Whilst you can fly to Aland from Finland and Sweden, many visitors prefer to travel by ferry as it allows you to take in the awesome views of Sweden’s, Finland’s and Aland’s archipelagos. The ferries used on these crossings are among the most luxurious in operation so the journey is actually more like a cruise than a means of transportation from A to B.