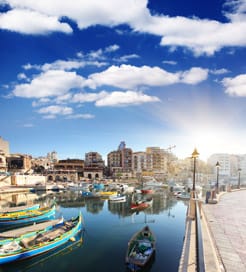 Compare ferries from Malta to Italy

There is currently just the 1 ferry route running between Malta and Italy operated by 1 ferry company – Grimaldi Lines. The Valletta to Salerno ferry crossing operates weekly with a scheduled sailing duration from about 31 hours.

Whilst we’ve taken great care to ensure the information on this page is correct, as the frequency and duration of crossings on all routes can vary from time to time we’d advise that you get a live quote for current availability on this Malta Italy crossing between Valletta and Salerno.

Ferries from Malta to Italy

Malta is a south European archipelago in the Mediterranean Sea, approximately 80 kilometres south of Italy.

It is one of the world’s smallest and most densely populated islands and its capital, Valletta is under a square kilometre in size. Despite this, Malta is still a popular holiday destination thanks to its warm climate, historical monuments, including nine UNESCO World Heritage Sites, and beautiful beaches and lagoons.

The capital city oozes 16th Century charm and was described by UNESCO as ‘one of the most concentrated historic areas in the world’. A stroll through the centre will take you past magnificent palaces and churches, a cathedral and various fascinating museums.

Malta’s main port can be found in Valletta, where you can sail across the Mediterranean Sea to Sicily. With frequent crossings to choose from, Malta is a useful departure point for one of Italy’s most beautiful islands.