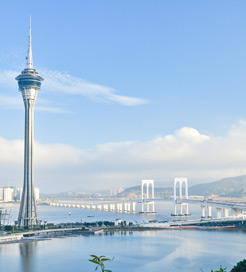 Compare ferries from Macau to China

As the frequency and duration of crossings on some routes varies we would advise that you do a live search for crossings from Macau to China to get the most up to date information.

Ferries from Macau to China

Defined by Portuguese colonial architecture and contemporary casinos, Macau is a fascinating mix of cultures. One moment you’ll be admiring 17th Century church ruins, then you could be sampling authentic Chinese food whilst relaxing in a modern sky lounge.

As one of the earliest European colonies in Asia and the last to be relinquished, Macau has spectacular historical landmarks around every corner. The most popular include the Ruins of St Paul's Church and the small village of Coloane which was a haven for pirates and privateers until 1910.

Travelling by ferry is a popular mode of transport in Macau and it boasts excellent services from its two ports. There is a large number of high-speed crossings to many destinations in China, all operated by some of the region’s leading ferry companies.