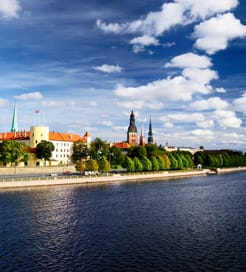 Compare ferries from Germany to Latvia

There is currently just the 1 ferry route running between Germany and Latvia operated by 1 ferry company – Stena Line. The Travemunde to Liepaja ferry crossing operates weekly with a scheduled sailing duration from about 20 hours 30 minutes.

Whilst we’ve taken great care to ensure the information on this page is correct, as the frequency and duration of crossings on all routes can vary from time to time we’d advise that you get a live quote for current availability on this Germany Latvia crossing between Travemunde and Liepaja.

Ferries from Germany to Latvia

Latvia is a Baltic Nation in northern Europe, sandwiched between Estonia to the north and Lithuania to the south.

With its turbulent Soviet rule now in the distant past, Latvia has thrived as one of Europe’s up and coming tourist destinations. Seemingly endless nature makes up the majority of the landscape, with unspoilt forests and sparkling lakes offering mouth-watering backdrops to any hike or bike ride.

For a relatively small country, Latvia has a few ports along its five hundred kilometre coastline, so it’s easy to reach by ferry. Across the Baltic Sea, there are numerous routes from countries in northern Europe and Scandinavia.