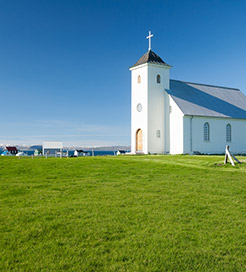 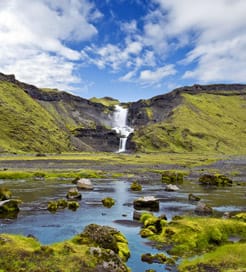 There are 2 ferry routes operating between Flatey Island and Iceland offering you combined total of 28 sailings per week. Seatours operates 2 routes, Flatey to Stykkisholmur runs 14 times per week & Flatey to Brjanslaekur about 14 times weekly.

As the frequency and duration of crossings on some routes varies we would advise that you do a live search for crossings from Flatey Island to Iceland to get the most up to date information.

Ferries from Flatey Island to Iceland

Flatey is the largest of the Western Islands in northwest Iceland, believed to have formed during the ice age.

Its name translates to ‘flat island’, which gives a clue to its landscape, and measures just 2 by 1 kilometres. The only road leads from the ferry terminal to the ‘old village’, a tiny settlement comprising beautifully coloured and restored houses of the island’s original inhabitants.

Flatey also has a church, built in 1926, which sits next to the oldest and smallest library in the country. In terms of nature, Flatey’s green pastures are filled with sheep and the skies with numerous migratory birds including puffins, so it’s a great stop-off for birdwatchers, too.

The ferry terminal lies just off the southern terminus of the island’s singular road. From there, you can sail to Brjanslaekur to the north and Stykkisholmur to the south on the mainland, with regular sailings provided every week.

Iceland is an island country between the North Atlantic and the Arctic Ocean, with a population of just over 300,000.

As a sparsely populated nation, Iceland has plenty on offer for those who love the great outdoors. It’s defined by a variety of desolate landscapes and natural wonders, with countless hot springs, hundreds of volcanoes and spectacular displays of the Northern Lights.

Reykjavik is the world’s most northerly capital and the country’s most populous city. It’s a relatively small settlement, known for its vibrantly coloured houses, exciting museums, historic old town and large collection of funky bars and cafes.

The northwest region of Iceland has a number of domestic ferry routes taking you to some of the country’s most beautiful islands. For international crossings, Iceland is reachable from northern Europe, with weekly long-haul sailings available from Hirtshals in Denmark.