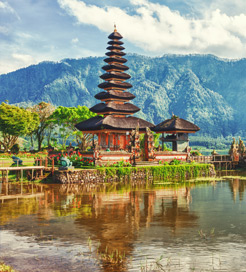 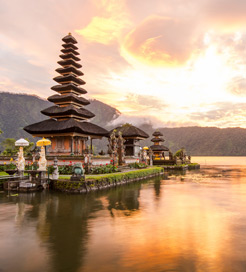 Compare ferries from Bali to Indonesia

There are numerous ferry crossings operating from Bali to Indonesia. Ferries currently connect 3 ports in Bali with 4 ports in Indonesia.

There are a combined number of 36 ferry crossings each day across a selection of 9 Ferry Routes which are operated by 6 ferry companies including Bluewater Express, Marlin Fast Boat, Dcamel Fast Ferry, Bali Eka Jaya, Arthamas Express & Golden Queen Fast Boat with the shortest crossing taking around 30 minutes (Sanur to Nusa Lembongan (Mushroom Beach)).

This is a general summary of the services on offer between Bali and Indonesia, for live information select from our Fare Search.

Ferries from Bali to Indonesia

Bali nestles between Java to the west and Lombok to the east in the Lesser Sunda Islands, Indonesia.

A small island with an estimated 10,000 temples and a vibrant arts culture, Bali has much more to offer than just picturesque beaches and excellent surf. Aside from its natural beauty, the happy-go-lucky Balinese way of life makes it hard to leave, too.

Kuta in the south boasts a superb nightlife, Ubud is characterised by stunning rice fields, while the heart of the island is dominated by dramatic volcanoes and hillside temples and shrines, so there’s plenty to see on this incredible island.

Travelling by ferry is a convenient way to explore Indonesia’s beautiful islands and Bali is a great departure point for doing so, with a few ports on along the east coast offering frequent routes to the nearby island of Lombok and to the Gili Islands.

Indonesia is a country located along the Equator between the Indian Ocean and the Pacific Ocean. It is the largest archipelago in the world, and the fourth most populous country with the largest Muslim population.

Because of its geographic location, Indonesia has been blessed with the most diverse landscape, from fertile ricelands to the vast rainforests and even snow-capped peaks. Boasting 13,466 tropical islands, Indonesia has some beautiful white sand beaches, many of which still uninhabited.