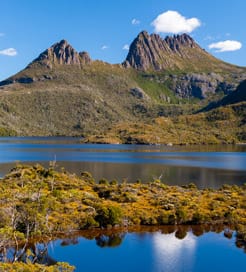 Compare ferries from Tasmania to Australia

There is currently just the 1 ferry route running between Tasmania and Australia operated by 1 ferry company – Spirit Of Tasmania. The Devonport (Tasmania) to Melbourne ferry crossing operates weekly with a scheduled sailing duration from about 9 hours.

Whilst we’ve taken great care to ensure the information on this page is correct, as the frequency and duration of crossings on all routes can vary from time to time we’d advise that you get a live quote for current availability on this Tasmania Australia crossing between Devonport (Tasmania) and Melbourne.

Ferries from Tasmania to Australia

Tasmania or 'Tassie' as it’s known locally is located about two hundred and forty kilometres off the south east coast of mainland Australia and has a population of around half a million.

Tasmania is a place of wild and beautiful landscapes, friendly, helpful people with a relaxed island lifestyle, wonderful wine and food and a haunting history evoked by spectacular convict-era ruins.

It's also Australia's smallest state and the most geographically diverse with over 40 per cent of Tasmania reserved as national park and world heritage area.

So no matter where you go in Tasmania, whether you spend time in one location or drive around the island, we know you'll be delighted by what you'll find and surprised at how much bigger Tasmania really is on the inside.

Getting to Tasmania by sea is relatively simple and stress free. Ferries depart from Port Melbourne on mainland Australia and dock at the Esplanade in East Devonport on the north side of Tasmania. The popular crossing operates year round and is run by TT-Line with their Spirit of Tasmania ferries.