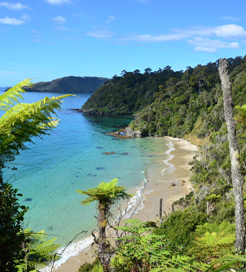 There is currently just the 1 ferry route running between Stewart Island and New Zealand operated by 1 ferry company – Stewart Island Experience. The Oban (Stewart Island) to Bluff ferry crossing operates weekly with a scheduled sailing duration from about 1 hour.

Whilst we’ve taken great care to ensure the information on this page is correct, as the frequency and duration of crossings on all routes can vary from time to time we’d advise that you get a live quote for current availability on this Stewart Island New Zealand crossing between Oban (Stewart Island) and Bluff.

Stewart Island is the third largest in New Zealand, situated 30 kilometres south of the South Island.

Lying just across the Foveaux Strait, Stewart Island has one of the country’s most untouched landscapes. It is fast becoming a popular eco-tourism destination, boasting immaculate beaches, dense forests and picturesque bays.

As you would expect from an island with unspoilt terrain, Stewart is home to many species of bird including 20,000 of the endangered brown kiwi, the flightless Stewart Island kiwi and the nearly extinct kakapo parrot.

It’s also a great location for adventure sports like kayaking and walking, where, on an evening stroll, you might catch a glimpse of the spectacular Aurora Australis. As for hiking, the 39-kilometre trek along the Rakiura Track lasts 3 days, taking you through some of the national park, across high ridges and along the beautiful Paterson Inlet.

Stewart Island makes a fantastic day trip or short excursion from the South Island, so there are frequent crossings back to the town of Bluff which usually last around an hour.