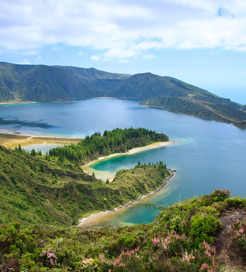 There is currently just the 1 ferry route running between Sao Miguel and Terceira operated by 1 ferry company – Atlanticoline. The Ponta Delgada to Praia da Vitoria ferry crossing operates Weekly with a scheduled sailing duration from about 4 hour 30 minute.

Whilst we’ve taken great care to ensure the information on this page is correct, as the frequency and duration of crossings on all routes can vary from time to time we’d advise that you get a live quote for current availability on this Sao Miguel Terceira crossing between Ponta Delgada and Praia da Vitoria.

Ferries from Sao Miguel to Terceira