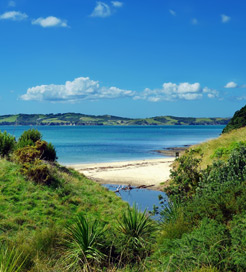 There is currently just the 1 ferry route running between New Zealand and Motuihe Island operated by 1 ferry company – Fullers Ferry. The Auckland to Motuihe ferry crossing operates weekly with a scheduled sailing duration from about 35 minutes.

Whilst we’ve taken great care to ensure the information on this page is correct, as the frequency and duration of crossings on all routes can vary from time to time we’d advise that you get a live quote for current availability on this New Zealand Motuihe Island crossing between Auckland and Motuihe.

New Zealand is an island nation in the south-west Pacific Ocean consisting of the North and South Islands, approximately 1,500 kilometres east of Australia.

When it comes to urban areas, New Zealand doesn’t fail to deliver, either. The capital, Wellington is the cultural hub, characterised by Victorian architecture and a vibrant downtown, whilst the affluent Auckland, with its iconic Sky Tower, boasts superb restaurants and a superyacht-filled harbour.

As a country comprising 2 main islands and numerous offshore islets, travelling by ferry is a popular way to get around New Zealand. There are plenty of fast crossings to the Hauraki Islands by Auckland, between the North and South Islands and to Stewart Island in the south.

Motuihe Island is in the Hauraki Gulf, a large stretch of water to the northeast of Auckland, New Zealand.

Defined by a tumultuous human history and enticing beaches, this recreation reserve is one of the country’s greatest escapes, lying just a thirty minute ferry ride from the hustle and bustle of Auckland. With Maori origins, Motuihe became a scarlet fever quarantine in the late 19th Century, a First World War prison camp and, finally, a naval training base during the 1940s, with many fascinating remnants still visible today.

Camping remains a popular activity, thanks to the efficient pest eradication and recent flourishing of indigenous trees and plants. A successful conservation programme has resulted in some wonderful bush walks, too, where you may spot some of the rare little spotted kiwi birds, released onto the island in 2009.

Motuihe is a short ferry ride from the port of Auckland, with weekly crossings to the island’s north-western tip.